Deprecated: implode(): Passing glue string after array is deprecated. Swap the parameters in /home/customer/www/raestonehouse.com/public_html/components/com_sh404sef/shPageRewrite.full.php on line 220
 Distracted Driving Not Okay! 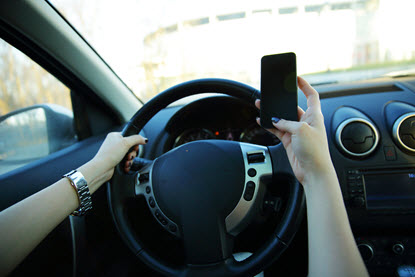 While out for a walk in my neighborhood the other day I noticed a small white car approaching me, unusually slowly. I figured it to be my neighbour, who tends to do so. As the car passed me I was startled to see a young woman behind the wheel, her hands on the bottom of the steering wheel and her two thumbs pecking away on her smart phone. She would take the odd peek at the road ahead, then go back to her pecking away on her phone.

Smart phone … stupid driver! If she lived in the neighborhood, what could be so important that she would have to text somebody, only minutes after leaving home?

Then there are those that still choose to talk on the phone, while they are driving. There is hardly a day go by where I don’t see someone yacking on a phone held in one hand up to their ear, while steering with the other. While totally anecdotal, the biggest offending demographic that I see, is young to middle-aged men, driving large pick-up trucks. Apparently, having the label of contractor or tradesman gives them rights that others don’t have, or so they would have you believe.

As of June 1st, the distracted driving fine rises to $543.00 for the first offence. You risk driving prohibition for repeat offences. Second offence will cost you $888.00 and a third in the same year, $1600.00.

Time will tell if fines will help change driver’s habits. When it comes to automobiles, driving, texting and/or talking on the phone, there will likely always be people who think the law applies to everyone else. This is evidenced by the fact that RCMP road checks still routinely catch people who don’t bother to do up their seat belt. Pass it on!

This email address is being protected from spambots. You need JavaScript enabled to view it.
More in this category: « Kelowna’s Stupid People of the Day Award
back to top