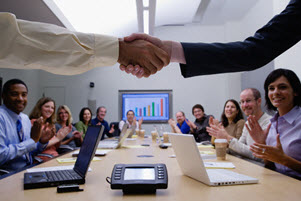 Are you a leader or a follower? Chances are if you are reading this article you fall into the leader category.

And if you are recognized as a leader, sooner or later you will be asked to chair a meeting or perhaps a longer term commitment to chair a committee. Leadership skill building tends to be cumulative … you build upon previously learned and mastered ones. Unfortunately, far too many people take on a chairing role without any real skills or experience to do so. And we wonder why so many meetings are ineffective and “a waste of time” in the minds of the more cynical and vocal group members?

This article provides tips & techniques to not only make your meetings more effective, but help you to stand out as a Master Chair.

The rules for the meeting attender give them great freedom and they are looking at the chair to set and enforce the meeting rules and to enforce them with respect to all participants and in the best interest of the meeting itself.

Agreements are specific guidelines, agreed to by all meeting participants. Starting on time (probably the most difficult for the new chair to accomplish) is a common example. Agreements are intended to promote positive meeting behavior. They commonly emerge from the implicit expectations of one or more participants, such as “I wish people would speak more supportively.” By making these wishes public, expectations become explicit. Then they can be examined and adopted as agreements or rejected by the group.

Some common agreements for meetings include:

How do you create agreements?

Agreement terms must be clear and observable. You can observe people being on time, but you can't observe them “having a good attitude” because that is too subjective. Agreements must also be entered into freely and remain open to renegotiation.

To create agreements for your meeting:

A key role of the Chair is to maintain order when a disturbance takes place. The maintenance of order is a most important requirement that a meeting attender seeks, but seldom, despite their frustration at being unable to hear another individual speaking, ask the Chair to do something about it. Unfortunately what usually happens is that the ignore the breach of rules or etiquette and pretend that nothing is wrong, hoping that hoping that a subsequent speaker will explain or give a hint of what was said.

A common mistake occurs when a speaker gains the floor and inadvertently starts a lengthy argument for or against the some point that the group has either already adopted or rejected firmly in prior debate.

Inexperienced Chairs often have the view that a large meeting is harder to manage than a small meeting. Not so. Management problems are a function of how many people are participating in the discussion, not of how many are in the room.

As the Chair you are the leader and are serving as a role model by listening, showing interest, appreciation and confidence in members.

As people first come into the room do a check of the body language of each person. Is there tension in the room? Does someone have an obvious vibe that you might need to tap before the meeting starts?

Actions do speak louder than words. Applying this maxim to meeting management requires that you take careful stock of your meeting room and where people will sit. How much does it matter? In his book Silent Messages, Albert Mehrabian reports the percentage of a message communicated through our different communication channels in this way:

Scan the meeting room continuously for communication with the audience. Look for raised hands, troubled expressions, lack of interest, or inattention, and learn to read minds, anticipate problems developing, and notice anything that may interrupt the flow of communication from everyone to everyone else. You can learn a lot, but you need to do this without taking your focus off the speaker. With experience you will develop a sixth sense that allows you to anticipate problems in the audience before they grow into mammoth time wasters.

Particularly watch for signs of the following problems:

Because of its overwhelming importance to the satisfaction of participants, planning for discussion management or facilitation is a critical skill for great meeting leaders.

As well as being aware of the problems previously identified, the Chair needs to ensure the following:

Often, agenda items spawn dialogue among a small group who have important views to share with each other. However, when other attendees have no interest in the conversation, they become bystanders at their own meeting.What to do:Make the spontaneous break-out session public by saying: “This discussion appears to involve only a few people. Is it something that can be resolved rapidly or is there another way to handle this? What does the group want to do?”

Call for a realistic agreement: “I’ve noticed that we don’t follow our rule of starting and ending on time, which causes problems for me. Could we make a new agreement that reflects our true intentions and practice?”

Announce it when agenda items run over budgeted time: “We have spent more time on this item than intended. What does the group want to do?” Of course, if you assign more time, you’ll need to reallocate the entire meeting’s time budget at this point.

More in this category: « So You’re Chairing a Committee Meeting: Tips & Techniques for Effective Meeting Management The Brainstorming Technique »
back to top