How Big is Your Sandbox? 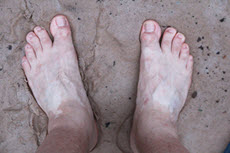 How big do goldfish grow? It seems an innocent enough question. The answer is "it depends". It depends on the size of the aquarium that they spend their days swimming around in. House-bound goldfish can perhaps make it to 2 to 3 inches. Goldfish that have been released to the wild and haven't ended up on the menu of somebody higher up the food chain have been reported to grow to a whopping 12 to 14 inches.

Unless you find the collecting of trivia to be fascinating I would expect the next question forming in your mind to be "Who cares? Why is this important to me?" Okay, that was really two questions disguised as one...

The point: How many of us have had limitations placed upon our personal growth and development and our potential, by others or even worse ... by ourselves?

In my high school years I was excited about cooking and wanted to become a chef. After graduation I found a position that would lead me towards achieving that goal. Or so I thought! It was my first foray into the working world and I ended up having some very cynical and jaded older workers as my role models. If I wanted to survive in the workplace, I needed to be the same as them.

After a year of working as a cook's assistant I experienced more than several people's shares of trouble, and experienced a couple downward promotions. After a year working on the dishwasher in the Dietary Department in a large psychiatric facility I wondered how low can you go? Then after a further demotion to the pot washer I realized that I guess you can go lower than a dishwasher. It was a hot and thoroughly nasty job.

My goal to becoming a chef vanished. I began to see myself as the "boy from the kitchen." I saw my future as perhaps becoming a cleaner on the housekeeping staff or perhaps, if I was lucky, a position as Driver in the Transportation Department. Each of those roles would have paid more money than I was making running a pot washer machine. The bar wasn't raised very high. I didn't have any long term aspirations. As the saying goes, all my eggs were in one basket with the plan of becoming a chef. There was no plan B. I got caught up in the day-to-day activities of earning a living. I bought into the limitations that others placed on me and those that I had myself.

The game-changer for me was seeing a job posting on the bulletin board looking for Registered Nurses. It paid in excess of double the wages that I was making as the Potwasher supervisor. I had the requisite educational requirements and went off to college to achieve my diploma in nursing. I had broken free of the "aquarium" that was limiting my growth. I was no longer the boy from the kitchen.

In an ironic twist of fate, I returned to that facility five years later as a Registered Nurse and worked there for a decade, actually to the very day. Well guess what? After a decade I was finding the environment once again to be too small and restrictive to me. Once again I was letting other people put restrictions and sanctions on me. Once again I was putting limits on what I could do.

As many others have done in the past I took the geographical cure. I moved my family across the country to beautiful British Columbia, a new location where nobody knew me. A new life.
Twenty years ago I discovered the communications & leadership program at Toastmasters International and in the beginning it took me a couple years to figure it out. At about two years into the program I was becoming frustrated. I wasn't growing. My fellow club members were able to provide me with an evaluation of my speech even before I delivered it. They were so used to my style that they could predict how I would deliver a speech.

A fellow club member gave me some advice that I remember to this day. "Rae, you need a bigger sandbox." Simple, yet sage advice. For me to grow I needed to experience opportunities that were outside of the comfort of my Toastmasters club. I needed to continually raise the bar on meeting challenges in life and accomplishing even more challenging, yet achievable goals.

I have gone on from there to develop entrepreneurial pursuits and to lead community-based organizations. I have found that I need an ever-increasing bigger sandbox.

It is close to New Years as I am writing this article. Many people are thinking about making New Year's resolutions. Is this the year that you step out of your restrictive sandbox?

For this upcoming year ... build yourself a bigger sand box. You will be glad you did.

Published in Personal Development
Tagged under

More in this category: « Top Ten Personal Empowerment Tips Do you forgive all those who have hurt you? »
back to top