Deprecated: implode(): Passing glue string after array is deprecated. Swap the parameters in /home/customer/www/raestonehouse.com/public_html/components/com_sh404sef/shPageRewrite.full.php on line 220
 I would like to introduce … Power Networking Tips & Techniques

I would like to introduce … Power Networking Tips & Techniques 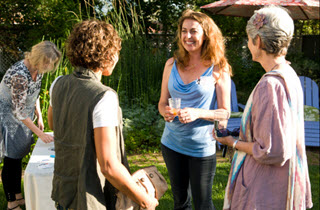 A common anxiety-producing situation in a shy networker is when a third or more persons join the conversation and it falls upon them to introduce everyone.

Who do you introduce first? Do you use first and last names? Are you required to provide collateral information about each of the people that you introduce?

Life is getting a lot more casual these days, at least in North America but I am sure that my etiquette expert friends would agree that there is basic protocol that should be followed when making introductions.

Shaking hands upon meeting: Shaking hands upon meeting someone for the first time has become commonplace and is to be expected. Even if the other person is well known to you it is quite acceptable to shake hands in greeting if you haven’t seen them for a while. Gender and age used to determine who reached out first but that has gone by the wayside. If you are sitting when introduced to someone for the first time it is appropriate to stand first unless you are in a restaurant or another setting that would make it difficult to do so.

Introducing peers to each other: As they are on the same social level it really doesn’t matter who you introduce first. Use both their first and last names when introducing them unless you don’t know the last name. “John Smith this is Jane Walker. Jane works in our marketing division. And if I’m not mistaken John you used to work in marketing didn’t you?” Pronounce the names clearly so that it is easily understood and if you can provide a little collateral information about each of them do so. If you are aware of some common areas that the two individuals share it can be a great way to seed a conversation i.e. get it going.

Introducing a Superior to a Subordinate: I have some personal difficulties with the term superior if it means that they are better than me, my personal baggage. On the other hand, if it refers to the fact that they are higher up on the organizational chart than I am or perhaps more prominent in government, I can accept that. Rule of thumb is that you say the name of the superior first. “Mr. Smith I would like you to meet James Jones. He works in our Refreshments Division.” The same idea applies where you would supply some additional information to seed a future conversation or to help create a point of reference to the one that is receiving the introduction.

Introducing a customer to people in your business: The old adage of “the customer always comes first” holds true in this situation. It is a good way to respect your customer. As in other introductions it is helpful to provide some collateral information about the customer or even your business member that you are introducing. It can also be a good time to do a quick testimonial about some aspect of your business dealings with your customer.

Introducing Women: The old way of doing so was to introduce a man to a woman. “Mary I would like you to meet John.” You won’t create an international incident if you were to do so but nowadays the trend seems to be to use rank as your rule. If you don’t know who holds the so-called superiority, I would revert back to the old rule of man to woman. If anybody questions you, you could always say that you didn’t get the memo about the changes.

Introducing Older People: The old rule was to introduce the younger person to the older one, saying the name of the older person first. Now it is not so important.

More in this category: « Top 15 Networking No-No’s: Power Networking Tips & Techniques How High Does Your Elevator Go? »
back to top