The Beginning of Stories 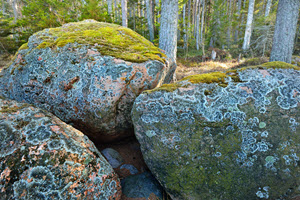 A long , long time ago, the world was without stories. Winters were cold and when the wind piled the snow against the longhouse, the people were sad.

One cold winter day, a young boy went hunting. The snow made the hunting easy and he shot several partridges then he sat down on a large rock to rest. A voice rumbled from the rock, "Listen, I will tell you a story."

The boy was startled and jumped to his feet and looked all around but there was no one. He was puzzled and sat down on the rock again. Again a voice from the rock rumbled, "Listen, I will tell you a story." The boy looked around and called out "Who are you? What is a story'"

"I am the Great Stone. I am very old, I have been here since the beginning of time. I can tell you how things came to be and how the world has changed, " the voice said. The boy was very frightened and trembled at the wise and powerful voice. Could the stone be talking to him? He stood up.

The Stone continued, "Friendship is based upon sharing. We must each share something that we have. I have stories, what will you share with me?" said the stone. The boy took one his partridges that he had just killed and placed it on the rock. "I will give you one of my partridges, Great One. Now, I would like to know what a story is," said the boy.

The Great Stone began to speak, at his words the boy sat back down. The Great Stone began to tell a wonderful story of how the earth was made. The boy listened with wonder as the stone shared his story. The boy didn't feel the cold wind and the snow falling around him. He felt warm inside and too soon the story ended. The boy thanked the stone and left to share the story with his family with a promise to return the next day.

The boy ran home through the snow. His people gathered in the longhouse to hear him tell of the stone that tells stories. Then the boy shared with the people the story that the Great Stone had told him and they too were warmed by his words. Their hearts filled with happiness and the cold winter seemed far away and their spirits warmed with the story.

The next day, as promised, the boy returned to the stone and shared what he had with the stone and the stone began to tell him another story. This continued for many days, each would share what they had to share. The stone told marvelous stories of talking animals, the sun and moon, how the lakes were formed and the days long before men walked the earth. Each day, the boy hurried home to share the stories with his people. The boy and his people learned important lessons from the stories that the stone shared and the people and the boy guarded these good stories in their hearts and shared them around their fires at night.

One day as the winter snows were melting and the tiny flowers of spring were beginning to push their green heads up through the soil, the Great Stone told the boy "Today, I have no more stories to share with you. I have shared all of my stories, now they are yours to keep and share with others. Tell your stories to your children and teach them to share them with their children. Remember to tell them wisely and they will continue to warm your hearts."

The boy returned home and as the years passed, he and his people found more stories to share. Stories came to all the people and even today they warm the hearts of those in the longhouse on cold winter nights.

Source: This is a Seneca story in a grade 1-3 children's study unit called the Native Americans by Evan Moor Corporation.

Tweet
Published in Tales of Inspiration
More in this category: « A Taste of Wisdom Sand Castles »
back to top