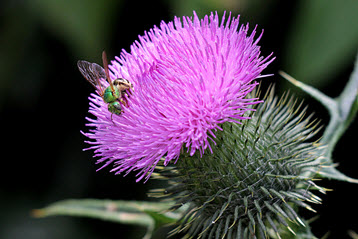 As an avid gardener throughout my adult life I have enjoyed the anticipation of watching a plant progress through its yearly life cycle. Most of our cultivated garden plants have a characteristic or trait that endears itself to us. The fragrance and vivid colours of the rose and lavender families, the first signs of life every spring as the croci break their heads through the sun heated soil and even the pesky dandelion have a beauty of their own. We desire them in our gardens for the sense of beauty of Mother Nature that they bring and to fuel our desire to feel good about the good things in life. But what about those plants that have a rugged, dangerous beauty to them? Do they also have a revered place in our garden?

Take for instance the Canadian Thistle, a plant that wears its own armor and protects itself to the death. Protecting itself from gardener’s hoes I would imagine. Left to their own design these majestic, yet aggressive plants will try to take over the world.

I had one of these entities in my front garden that I had apparently missed removing on an earlier weeding. Standing about 30 inches tall it was well on its way to developing its arsenal of spikes and thistle pods to take on the world. I decided to let the plant continue on its life’s journey. That was a moment in time that I would really have liked to have the option of having a “do over.”

Throughout the summer, the “Klingon Beast” as it became known in my family, reached its stately, mature height of six feet tall with a diameter of roughly the same. Pointy, deadly, wickedly sharp spikes covered every square inch of the beast. As the season ended the bright and abundant purple flowers turned into white “high-flying” seeds. Despite my wife’s sage advice of “you’ll be sorry if you don’t do something about it!” my curiosity to see what would develop prevailed.

I had a lot of time over the next few years to ponder that initial curiosity as the millions if not billions of tiny parachute seeds travelled the air currents throughout my yard and the world beyond in its noble attempt to take over the world. Everywhere a parachute landed, a new plant vigorously tried to follow in its mother’s mission. Trying to take over the world, starting with my yard!

One of my endearing qualities, at least in my mind, others may disagree, is my persistence and tenaciousness in carrying out a task. Those Klingon beasts weren’t going to take over my yard. Not if I had anything to do with it. For four years I have been fighting the battle of my life. Only a few babies remained in my yard this past summer but ‘vigilance’ is the word of the day. Anyone of those cute, prickly babies has the maliciousness to become a megalomaniac.  I wonder how the neighbour’s gardens are this year?

Have you ever encountered any of these “thorns” in your workplace? Have you ever been in the position of needing to do some weeding but sat back and waited to see what develops? Have you ever regretted not doing the pruning that was obvious to everyone at the time … except you?

Roses have thorns, they certainly look beautiful when in bloom but tend to be high maintenance to get them to that point. Is it worth the trouble? What about those Klingon beasts in your workplace? Has letting them grow into full battle armor been a productive strategy? Using gardener’s lingo, what about “nipping them in the bud” and calling attention to their thorny exterior.

The need for effective conflict resolution skills in the workplace, while getting a lot of attention in the media these days, has never been greater. As a leader, from my perspective, you need to be able to embrace conflict, recognize it for what it is and deal with it. You can’t escape it! The ability to recognize conflict, understand the nature of conflict and having the skills and self-confidence to bring a swift and just resolution to conflict will serve any leader well — the inability to do so may well be their downfall.

Workers need to recognize that they play a part in how conflict is dealt with as well. It is far too easy to get caught up in the everyday drama of a workplace. If you find yourself more concerned about catching up on what is happening with your co-workers’ private lives when returning to work from your days off than you are about learning what you need to know to carry on with your day’s activities, you are likely caught up in workplace drama.

In a dysfunctional workplace, managers or your fellow workers may even assign you a role in the drama, without your awareness or permission. Workplaces can take on characteristics of dysfunctional families. The role of Mom or Dad doesn’t necessarily have to be taken on by a person in a position of authority. It could very well be a strong-willed, yet quite dysfunctional, worker.

If you are fortunate to have developed your empathic skills, your Spidey sense, if you will, you will likely sense right away that are you in a dysfunctional worksite. Co-workers whispering among themselves, conversations that seem to end rapidly when a particular person walks into the room or an obvious reluctance to discuss ‘taboo’ subjects are signs of dysfunction.

So what to do about it? I am a firm believer in taking a proactive approach using the Three As: Assessment, Awareness & Action.

Whether you are the worksite owner, manager, team leader or a worker, you play a crucial role in creating a functional workplace. Leadership doesn’t always have to flow downwards, the other way works fine as well. In some worksites that may very well be a source of the conflict. The most important point is that someone has to take a lead and that someone has to recruit others to their way of thinking and believing in the cause. Disciples or champions if you will. The old adage of “you can’t push a rope!” comes readily to mind. As a formal or informal leader you have to take people where you want them to go. A functional workplace is your destination.

In the Assessment phase in your approach you would determine what exactly the state of affairs are in your worksite. Using the old who, what, why, when and where, playing detective, you would look for objective responses. You may find that the so-called conflict laden worksite is really only focused on a couple malcontents or some that really aren’t fitting in. If they have enough personal power behind them they could taint all the others that they come in contact with. On the other hand, you may have a worksite rampant with conflict. During this Assessment phase you aren’t trying to solve problems, only identify that they exist and determine the root causes.

The next phase of Awareness can be quite challenging. While it certainly involves educating everyone in techniques to reduce conflict or to behave in a more professional, functional manner, the biggest task of the Awareness phase is getting everybody to buy into the fact that there actually is a problem. And that while they may or may not be part of the problem, they are certainly part of the solution. For a solution to be achieved, everyone has to buy into it.

My research in other areas such as stigma reduction interventions has shown me that it isn’t a simple matter of telling somebody they have to behave or to act differently … or else, it is matter of having them experience and embrace the benefits of change … or the downside of not making changes. The reality is that a manager may have to be prepared to take corrective actions, should the desired changes not be made. While that fits more into the Action phase, it is important for everyone to know that it does exist as one possible consequence of not buying into the concept. The next step in Awareness would be that of educating all the stakeholders as to more effective ways of communicating and relating in the workplace.

I’m a firm believer of empowering the worker with real empowerment of course, and not just token support. I believe that an initiative would have better success of being accepted if it was created at the grass-root level and involved all levels of the organization.

The Action phase would seem rather obvious as to what should take place. One of the problems encountered with this stage is that interventions can be static i.e. they are put in place with no follow-up. A technique that would work well here would be the PDCA (plan-do-check-adjust). Create a plan, get everybody to buy into it, put it into action, check it out to see if it works, if it does … keep doing what’s working … if not … try something else. Adjust the plan … repeat.

Your worksite can be like a garden, a pleasant place to be and spend time. Or it can be a place overridden with weeds and undesirable elements. Which would you rather have Klingon thistles or prolific petunias?

More in this category: « Only a Fool PROtect Yourself! Calley’s Story: A Bullying in the Workplace Case Study »
back to top